Compared with way-back-when, when I was learning computer programming by using Hollerith cards and making bootstraps (complete with chads) to accept the input from a keyboard and display it on a monitor as a 3rd-year machine-coding project, the idea of online manipulatives for algebra, geometry and so on were just a gleam in Wolfram Research’s eye!  I wonder how many students since the 1990s could imagine life without something like Mathematica or GeoGebra or the amazing virtual manipulatives from McGraw-Hill or …
[insert your favourite here!]

Many of the participants in #mathchat recommended various online manipulatives, as well as more traditional ones!, during the discussion What are ‘brilliant’ activities with manipulatives?, and I thought it was about time I stopped playing with them and tried to make one myself…

Now, what to choose?  I decided I wanted to do something virtually that could also be done in ‘real life’, with ‘normal’ classroom technology, being something of a 2.0 Luddite!  Since I am a great lover of both 折り紙 (or origami to you!) and LEGO, I decided I’d try to represent folding a square of paper by dragging a corner down.  That, of course, would have been sufficiently interesting in and of itself, but Mr Maths Teacher said: “You should be doing something educational with this, preferably related to Mathematics”…

So, enter Haga’s Theorems, more specifically the First Theorem. [OK, here’s the link in English if you must 😉 ]  芳賀 和夫 (Kazuo Haga) a retired university professor, presented his theorems at the International meeting of Origami Science and Technology. Subsequently, he published two volumes about what he named: オリガミクス or Origamics.

Both are published by 日本評論社, but may be out-of-print or difficult to obtain.  Fortunately, his work is also available in English!  The mathematics becomes quite complex, and there is an interesting puzzle to solve too.  Definitely worth a read, if you’re a fan of origami and mathematics!

Basically, each of his three theorems says that a particular set of constructions can be used for dividing the side of a square of paper into any arbitrary rational fraction.  You can use this to divide a square into fifths, say, in three simple steps.  I’ll leave that for you to work out.  The table below should help…

Haga’s First Theorem is a neat little piece of geometry, which only needs Pythagoras’ theorem, and some algebraic manipulation to prove.  So, ideal for KS4, and for keeping Mr Maths Teacher happy… 😉

ID is always a rational number if CE is.

Let x be EC, then a number of other lengths are also rational functions of x. 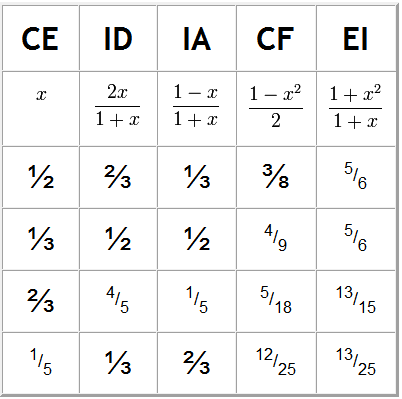 Table showing some examples of the generalized 1st Theorem

I was going to explain how I put the manipulative together, but the process I used was very similar to that described by Guillermo Bautista, so there’s no point in reinventing the wheel!  The differences between our two simulations are basically:

I also skipped over a few other steps, when creating EFGH, but the overall effect is similar!

Click on the diagram showing the theorem to visit my GeoGebra page and download the manipulative!  Alternatively, you can access them from my Mathematics Resources page on this site.

Anything to oblige, Maria!  I added a screenshot which you could use in conjunction with the table above to check things out.  This is also available on the Mathematics Resources page on this site.  The sides of the square were set to 360 to allow for many different fractions to be investigated (elevenths may be a problem though!).  I expect I will expand the manipulative itself to encourage exploration sometime in the future… Anyway, enjoy!

OK: Here is the dynamic worksheet if you want to try it out online!
(added 6th September 2010)