Education vs. Schooling: are things out of proportion?

Not long after starting to use Twitter and starting blogging, I was asked to summarize a discussion on #edchat.  Later, I reflected on a similar issue after three months of running #mathchat.  Last night (22nd February 2011), #edchat was again rehashing the same old ground about educational reform.  My views have not changed that much since either of my earlier posts. 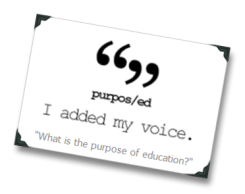 This is a reflection on a slightly different aspect of education, as part of the purpos/ed #500words series.

The question posed: “What is the purpose of education?” could as easily be rephrased: “What is education?”  Are we discussing the system of schooling by government, ways of raising children as ‘useful’ members of society, deciding what should be taught, or something completely different?  Behind this, a voice keeps asking: “What is the purpose of school?”  That is the question I’m responding to here, since it is easy to forget schools in this whole debate.  Some of the time I spent in school I remember as an exciting adventure.  Some memories are less positive, and not all the well-meant advice was helpful, based as it was on examination results.

First numbers, based on England, since education systems vary so much, and I am, at heart, a statistician!

Child enters school at 4 and leaves at 16.
School year is 195 days.
Child spends 6 hours per day in school.
There have been four leap years.

By 16, 10% of a student’s life has been spent in school.  The impact whilst there, though, is very much greater and, in many cases, can be damaging to their future because of perceived failure to learn (based almost solely on exam results).

Malcolm Gladwell suggested that 10,000 hours of practice was the key to success in any field.  Daniel Coyle suggests that the 10,000 hours needs to be directed towards the formation of myelin in three specific ways: training, motivation and coaching.

Would the current 14,000 hours spent in English schools not be better directed to nurturing and helping children to find something they are good at, and have a passion for, so that when they leave school at the age of 16 they feel successful?

We’d have to abandon fixed curricula and subjects, of course, with students working in dynamic groups, teaching and helping each other, guided by the teachers in the school.  Problems with maths? Go to Mr Y.  History? Ms A.  French? Mme J.  Want to learn an instrument, play a sport, start a school farm…?  If we must have accredited qualifications at age 16, and being pragmatic we need to, we could take the final two years (only around 4,000 hours after all) to help students focus on their strengths and build up a portfolio of evidence of actual learning and progress: evidence which allows them to leave school saying “I can…” and show concrete examples of their work.

Not every child is going to be a genius, but after 10,000+ hours in school they ought to be leaving as successful learners of something…

3 responses to “Education vs. Schooling: are things out of proportion?”